WE EXIST – STOPAIDS stand in solidarity with Chechen 100

Today a global day of action was called to demand an end to the appalling persecution of suspected gay men in the Russian republic of Chechnya. Activists gathered across the world to hand in a petition, signed by over half a million people, to 27 Russian embassies in 27 countries.

STOPAIDS staff joined the protest organisers Amnesty International UK and Stonewall outside the Russian Embassy in London. Notable figures such as Sir Ian Mckellan, Lord Michael Cashman, the LGBT Poet Lauriat Trudy Howson and activist Peter Tatchell all participated in the protest. Protesters wore t-shirts and held signs stating ‘WE EXIST’, and carried colourful flowers which we set down on a rainbow flag laid outside the embassy. 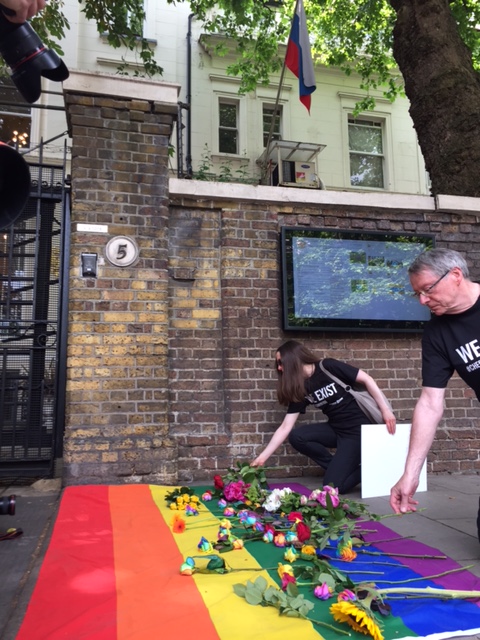 In Chechnya many gay men are married to women and are forced to lead double lives. Most men are unable to tell family or friends about their sexuality, as they fear being disowned by them. On 1 April this year, the Russian independent newspaper Novaya Gazeta reported that more than 100 men believed to be gay had been abducted as part of a coordinated campaign by the Chechen authorities. They forced these men into camps where they are subjected to torture, beatings and murder. The Chechen authorities have denied the claim, they stated that gay people do not even exist in Chechnya, because, if they did, their family would ’send them somewhere from which there is no returning’.

At the protest Peter Tatchell reminded us of Chechnya’s tyrannical history and noted our government’s failure to respond appropriately in his impassioned speech: “Our government has failed the people of Chechnya for a long, long time. It has right now failed LGBT Chechens in particular. Our government should be imposing targeted sanctions on Chechen human rights abuses… travel bans, the freezing of bank accounts and restrictions on students… I’m also astonished that the foreign secretary has not raised what is happening in Chechnya in the UN security council or in the human rights council. They are obvious, simple things that the British government and other governments could and should be doing. Finally, the British government ought to be making it loud and clear that it will accept LGBT refugees from Chechnya and other refugees from the police state repression there. Right now the situation in Chechnya looks bleak and hopeless. But we should remember no tyranny lasts forever, ever tyranny has its fall. So let’s work with all Chechens to make homophobia, biphobia and transphobia history.”

So far, the Russian authorities have stated that they are investigating the reports of persecution.

We hope you will join us in supporting the Stonewall, Amnesty and other campaigns highlighting this issue through the following links: