Young People Living With HIV Speak Out: AIDS Isn’t Over

That message is the reason I joined three other HIV positive young people in sharing my story on the Youth Stop AIDS and Students Global AIDS Campaign USA Speaker Tour in February. AIDS isn’t over, but young people have the power to bring about the changes needed to end AIDS as an epidemic in our lifetime.

It wasn’t that long ago that I was just like the students who came to hear our stories. Except as a student at the University of Cape Town, South Africa, we were constantly reminded of the dangers of contracting HIV and how we could protect ourselves. As a sexually active gay man, I frequently got tested. But, as my sister put it, I was living in a country with one of the highest infection rates in the world, and I became HIV positive. I contracted a virus that 7.1 million people in South Africa also have, including 1 in 4 gay men. Thanks to life-saving antiretroviral (ARV) medicine, HIV is a chronic illness, and I can look forward to a long, happy life.

Not everyone with HIV has access to those life-saving medicines, though. In fact, nearly half of all people living with HIV still don’t have access to HIV treatment. Despite that, in January, President Trump proposed cutting U.S. funding for the global HIV response by $1.3 billion. Those dangerous cuts and years of flat funding for HIV programmes like the highly-effective President’s Emergency Plan for AIDS Relief (PEPFAR), are the reason why we not only spoke at Universities across the US, but also met with Senator Chris Murphy’s office. Senator Murphy and his Congressional colleagues can play a vital role in ending AIDS by increasing funding for HIV prevention, care, and treatment.

Despite Trump’s attempts, thanks to sustained grassroots pressure Congress rejected President Trump’s plan and funded programmes at the same level as the previous year. Though it is great news that Congress rejected Trump’s cuts, we won’t end AIDS by 2030 without a minimum of $850 million in additional PEPFAR funding in the 2019 budget.

Globally, donor government funding for HIV is at its lowest level since 2010. UNAIDS has predicted that to reach the Sustainable Development Goal target of ending AIDS by 2030, stakeholders need to increase funding by one third. The It Ain’t Over campaign is calling for the UK Government to double its commitment to the Robert Carr Civil Society Network Fund (RCNF) to £10 million, over three years. RCNF funds global civil society networks led by and working with communities disproportionately affected by HIV and who experience the biggest barriers to accessing services. These include sex workers, young people, people who use drugs and lesbian, gay, bisexual and transgender people. Grantees work to create more accessible HIV services and ensure the hardest to reach groups are supported. Currently, RCNF is severely underfunded and is only able to fund half of the quality proposals it receives. We have made great progress towards ending AIDS but now we need serious political will and increased funding from donor government’s to finish the job.

HIV treatment truly makes the difference between life and death, and it’s gotten simpler and cheaper over the years. I started taking ARVs seven months after my diagnosis. My doctor at the time assured me that I had nothing to fear and he guided me through the process and answered all my questions. My transition to medication was a painless one: no side effects and no need to change meds to find the right one. Not only was I lucky in that regard, but I was also lucky that I could easily access medication living in South Africa. This was not the case for all those who had gone before me. I was acutely aware that while I had all I needed to live a long and happy life with HIV – not everyone in South Africa would be quite so lucky.

Despite our progress, now is not the time to become complacent; governments, funders and organisations need to redouble efforts, not reduce them. While erasing this epidemic is one of the greatest challenges of our time, when success comes it will be a testament to what can be achieved when medical knowledge is supported by political power in order to result in the greatest social benefit.

So, what’s not over? There are still people dying of AIDS. We have the tools to stop AIDS and yet around the world, especially in many parts of Africa, AIDS-related deaths are a daily occurrence. New infections are still occurring globally, over 1.8 million people contracted HIV in 2016 alone. People living with HIV cannot access life-saving medication. What’s not over? Stigma toward people living with HIV isn’t over. There are criminalisation laws in place simply for contracting a virus. For me, returning to South Africa and seeing the devastation caused in the wake of the epidemic is a stark reminder that this chapter of history is far from concluded. My story isn’t over. Our story isn’t over. It Ain’t Over. 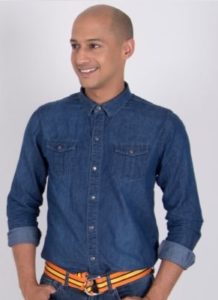 Krishen Samuel is a speech-language pathologist and activist from Johannesburg, South Africa who recently completed an MSc in Global Public Health and Policy. He has lived with HIV since he was 22.