At only 23 years old Becky Kroger has already achieved so much. Becky grew up in South Africa in a children’s home, before being adopted and moving to the UK when she was 14 years old. Becky has lived with HIV since she was born and over the years, through her work with CHIVA, One to One Children’s Fund and Youth Stop AIDS (YSA), she has become a HIV advocate, speaking to audiences all over the UK about her personal journey of living with HIV.

STOPAIDS and YSA campaigned for a Department for International Development (DFID) Minister to attend the conference, along with a Youth Delegate. We were thrilled when Alistair Burt agreed to attend AIDS 2018 and asked Restless Development and STOPAIDS to help select the official Youth Delegate. This was the first International AIDS Conference a DFID Minister has attended since at least 2012 and was a clear demonstration of Alistair Burt’s leadership and commitment to the global HIV response.

Becky was chosen to be DFID’s official Youth Delegate and accompany Alistair Burt to AIDS 2018. This International Youth Day we sat down with Becky to reflect on the conference and talk about the importance of young people’s voices in the HIV response.

Hello Becky, how are you? It’s been a busy few weeks for you! When did you get back from Amsterdam?

I got back on Tuesday afternoon, I was there for 2 weeks. The first week was the conference, the second week I stayed with my Mum’s friends for Amsterdam Pride. It was really fun, but I’m exhausted!

Amsterdam is such a great city, isn’t it. Well, congratulations on being chosen to be the UK Government’s official youth delegate for AIDS 2018. What an amazing opportunity! Can you tell us a little bit about how you got involved?

We were sitting in the YSA steering committee meeting and James [the YSA coordinator] told us that there might be an opportunity for DFID to go to the conference and bring a young person. It was early days so we didn’t know if DFID would even be going but James explained the process and I just felt at the time that it was going to be me. It was the hardest application I ever put in! But a few days after I applied I got offered an interview. Then I came down to London for the interview and when I left the room I just poured my eyes out. It was such a challenging interview and I wasn’t sure how I did. But only a few hours later I got a call to say I got the role!

How did you feel when you got that call?

I felt a mixture of emotions, I was crying, happy and excited! It was really tough and I’d tried my best, so I felt relieved that I had got that far and that my best was worth it.

What was your role as DFID’s youth delegate?

The aim was to have a young person fully involved in making decisions alongside the civil servants and the Minister. I attended meetings with young people and the Minister and we looked at what we are doing in the UK and what we could be doing.

It was so empowering as a young person to have my voice heard by decision makers and to be at the table with them. It was also an opportunity to share my personal experiences with the decision makers, as a person living with HIV.

What was your biggest highlight from the conference?

My highlight was Tuesday, the day I spent with Alistair Burt. I took Alistair Burt, Sally and Juliette from DFID around the global village, to see all of the civil society networking zones and introducing them to my friends. It was really fun, even though I made us late to our next meeting!

Do you have any key takeaways from AIDS 2018?

I learnt a lot at the conference; there was a lot of personal development for me. I made a lot of friendships and bonds with other young people and I learnt skills like how to present myself and improving my public speaking.

But I also learnt about issues in the HIV response that I wasn’t aware of before. #SheDecides, the women’s rights movement, I found really empowering. A lot of women around the world can’t have their say on their rights, dreams and aspirations. As a young woman myself I just find it hard to think about women my age who don’t have the choices I have.

I also learnt about HIV criminalisation, I never knew that people could go to prison because of their HIV status. I spoke to someone who had been sent to prison for passing on HIV to his partner and he didn’t even know that he had HIV at the time. This opened my eyes to how HIV is perceived in some parts of the world and how much change is needed.

Why do you think it is important for young people to have their voices heard in the HIV response?

Why was it so vital for DFID to attend AIDS 2018 and take a youth delegate with them?

The conference brings the world together, DFID needs to be there to see first hand what is happening around the world. Alistair Burt said himself that DFID should have done this a long time ago, and that he learnt so much about the issues surrounding HIV. For decision makers to make good decisions, they need to see and understand the issues first.

So, what’s up next for you?

I don’t know! I’m just going with it. I live two separate lives, my life working in Ipswich and then when I come to London it’s another life. I don’t know if these lives will ever merge. But I do have a goal to move to London eventually. I really like London, you know, I grew up in Cape Town where it’s so busy and I just crave that sometimes.

We’ll look forward to having you here in London! Finally, have you got any words of advice for a young person who wants to get involved in HIV activism?

If you’d like to get involved in activism I would say look up a few organisations you’d like to get involved with. I started off working with CHIVA and they opened up so many doors for me. I went from CHIVA to One to One, to YSA. But you do have to make sure it’s what you want do, because being an activist is a long term thing. Or if it’s a short term thing make that clear from the start. You have to be prepared for more opportunities to come your way, because as soon as you open your mouth they do! 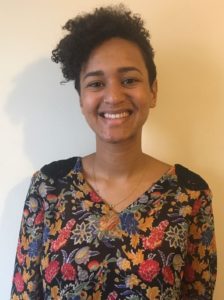