By Saoirse Fitzpatrick on 15th October 2018

The health innovation system is ‘broken’ and failing patients 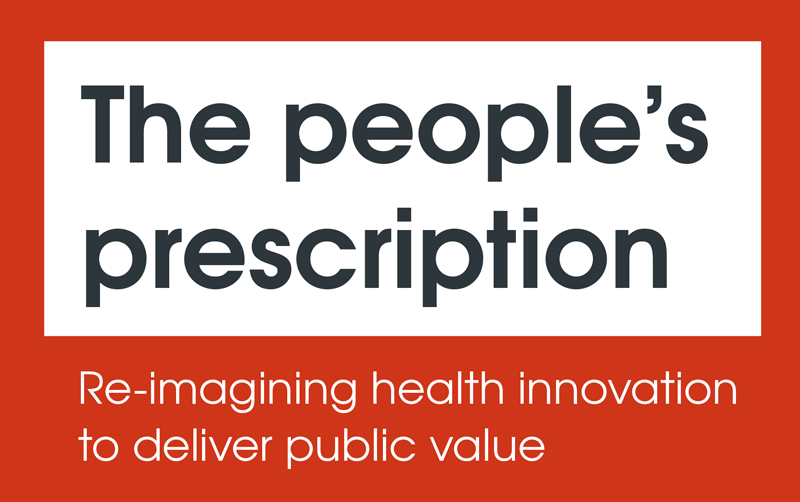 NHS patients are being let down by a global health innovation system which fails to deliver the treatments they need at prices that government can afford, according to a new report led by Professor Mariana Mazzucato, Director of the UCL Institute for Innovation and Public Purpose (IIPP), in collaboration with STOPAIDS, Global Justice Now and Just Treatment.

The report, The People’s Prescription: Re-imagining health innovation to deliver public value , warns that health innovation is being hampered by a drive for profit and calls for a major overhaul of the system to ensure that more drugs and treatments are developed for critical health needs.

Although innovation in health is vital for the development of drugs used by the NHS and healthcare systems around the world, the report finds that the current system for developing drugs incentivises high prices and delivers short-term returns to shareholders, rather than focusing on riskier, longer-term research which leads to critically needed therapeutic advances.

The authors warn that the high prices of medicines are causing severe patient access problems worldwide with damaging consequences for health and wellbeing. The solution is not as simple as demanding lower prices but to understand how the characteristics of the system must be overhauled, from the dynamics of patents which are hurting transparency and collaboration to the ways in which corporate governance hurt innovation.

With the system ‘fundamentally broken’, the report maps out fault lines and recommends new concrete policy actions to deliver public value for the greatest health need.

Last year, NHS England spent £1bn on medicines that had received public investment, while spending on drugs is rising at five times the rate its budget is rising.

Professor Mariana Mazzucato said: “The diagnosis looks bleak for the health innovation system; it’s expensive and unproductive and requires a complete transformation. We have a situation now where the NHS is a huge buyer of drugs and the UK government is a significant investor in the development of new treatments, yet big pharmaceutical companies are calling the shots.

“In the year of the 70th anniversary of the NHS, this is an ideal time to take stock and rethink the system with a move towards a model that prioritises long-term public value above short-term corporate profits.”

As an immediate policy action, the report calls on governments to pursue their legal right to procure affordable generic versions of patented medicines, if companies refuse to drop their prices to levels affordable to national health systems such as the NHS. These legal rights are known as ‘Flexibilities’ within the World Trade Organisation’s TRIPS rules (Agreement on Trade-Related Aspects of Intellectual Property Rights). This could mean huge savings for the NHS. For example, evidence shows that the prices the UK pays for some cancer medicines could be reduced by between 75% and 99.6% if they could be procured as generics.

Intellectual property rules should also be reformed to make vital medicines more affordable and open to innovation, with patents only issued to truly innovative technology.

Conditionality would also prevent the public from paying twice for medicines. A treatment for prostate cancer – Abiraterone – was discovered by the Institute for Cancer Research (ICR), which receives 38 per cent of its funding from charities and the UK Medical Research Council, and 14 per cent from other government funding. The NHS then spent £172 million on the drug between 2014 and 2016, following five years of negotiations when the price was set just below NICE’s upper limit of acceptable costs. By the end of 2017, Johnson & Johnson had made around £1.9 billion in sales and the ICR had earned just £137 million.

Mission-oriented research and innovation involves strategic decision making in both governments and business through purpose-led missions. This approach focuses on problem-specific challenges, which many different sectors interact to solve. The focus on problems, and new types of collaborations between public and private actors to solve them, creates the potential for greater spillovers than a sectoral approach. It was this approach that put a man on the moon, and lay behind the creation of the internet and entire new sectors like biotechnology.

Saoirse Fitzpatrick, Senior Advocacy Adviser, STOPAIDS, added: “We have to face the reality that our current system for developing medicines is not matching people’s health needs. If we carry on with business as usual then we are going to end up bankrupting patients and health services with high priced drugs and wasting precious financial resources on copycat medicines which do nothing but add to the pharmaceutical industry’s profits.

“We know there are other models out there, we need governments to work from this evidence base and build an alternative system for health innovation that gives us the medicines people need at prices we can all afford.”

Heidi Chow, Senior Campaigns Manager, Global Justice Now, said: “A pharmaceutical industry that makes billions in profits without providing the affordable medicines that people need is one of the scandals of our time. It’s easy to feel that there is no alternative, but in fact there are a whole host of alternatives that are already working in a number of countries. It is time to scale up what’s working, and drop what’s not so that people here in the UK and around the world can access the effective treatments they need.”

Diarmaid McDonald, Lead organiser, from Just Treatment, said: “NHS patients, like those who lead Just Treatment, have had their access to vital medicines delayed or denied because of the unaffordable prices charged by the industry. Sadly these high prices are not going away – they lie at the heart of our current medical innovation system. Until governments follow the recommendations in this report and set about creating a pharmaceutical system that puts patients and public health at its core, our health and our health systems will continue to suffer as pharmaceutical profits continue to soar.”

UCL was founded in 1826. We were the first English university established after Oxford and Cambridge, the first to open up university education to those previously excluded from it, and the first to provide systematic teaching of law, architecture and medicine. We are among the world’s top universities, as reflected by performance in a range of international rankings and tables. UCL currently has over 39,000 students from 150 countries and over 12,500 staff. Our annual income is more than £1 billion.

About The Institute for Innovation and Public Purpose (IIPP)

The Institute for Innovation and Public Purpose (IIPP) is a department within University College London (UCL) and part of The Bartlett faculty, known internationally for its radical thinking about space, design and sustainability.

IIPP’s mission is to change how public value is imagined, practiced and evaluated to tackle societal challenges and achieve economic growth that is more innovation-led, sustainable and inclusive.

Our research and teaching programmes aim to shape a dynamic and bold public sector driven by public purpose. Markets can be shaped by purposeful policy making. Markets can be designed to deliver public value.

STOPAIDS is a membership network of 70 organisations with a thirty-year history of engagement on international development and HIV and AIDS. We convene and unite UK civil society and shape UK leadership in the global response to HIV and AIDS. Our advocacy work addresses systemic issues critical to that response, including access to affordable medicines.

Global Justice Now campaigns for a world where resources are controlled by the many, not the few. We champion social movements and propose democratic alternatives to corporate power. Our activists and groups in towns and cities around the UK work in solidarity with those at the sharp end of poverty and injustice.

Just Treatment is a patient-led campaign fighting to secure fair and affordable access to medicines on the NHS, and to bring about a medical innovation system that prioritises the lives of patients and public health over the profits of pharmaceutical companies.