By Karris Hamilton on 4th February 2019

Health campaigners have called for the government to make major changes to the way medicines are researched and developed, after new analysis of the cost of leading cancer drugs to the NHS showed that £458 million was spent in 2017/18 on paying pharmaceutical companies for medicines developed with public funding. (1) 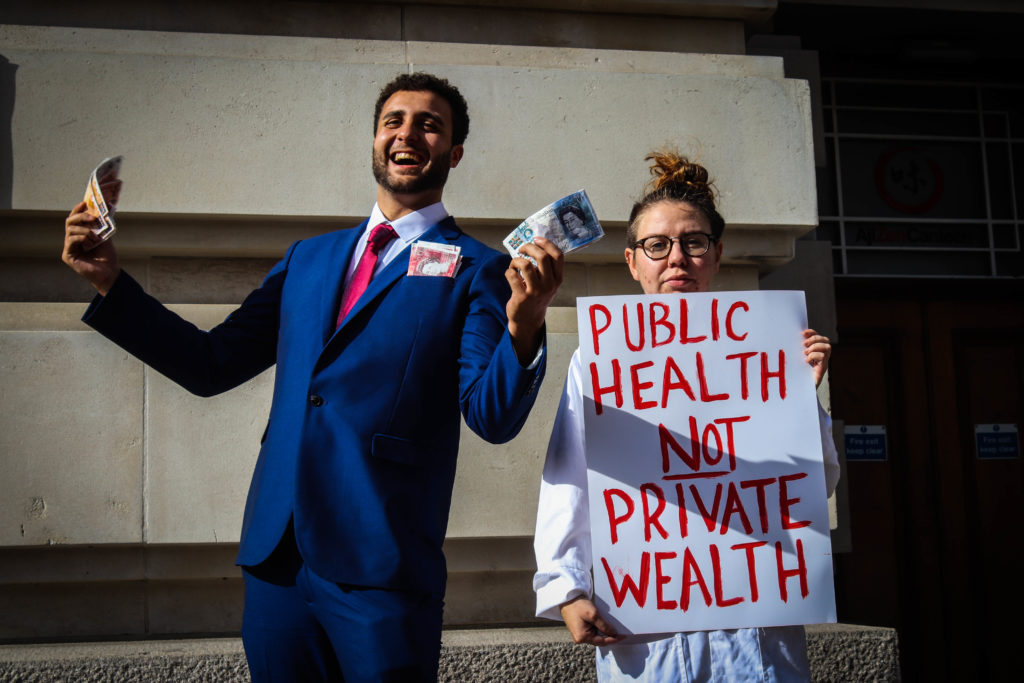 The figures, released by the Missing Medicines Coalition on World Cancer Day, show that 3 of the 5 most expensive cancer drugs to the NHS last year were developed from publicly-funded research. As a result the public are paying twice for medicines – first for the research and then in high prices to the drug industry. The publicly-researched cancer drugs include:

NHS England spent a record £18.2 billion on medicines in 2017-18, up 28% since 2010. The medicines bill is still rising faster than the NHS budget even after the increases pledged by the Chancellor over the next five years in his autumn budget.

In December a WHO technical report found that the pricing of cancer drugs is disproportionately higher than other types of pharmaceuticals and therapies around the world. It identified that pharmaceutical companies set prices not based on the costs of R&D, but rather according to “commercial goals, with a focus on extracting the maximum amount that a buyer is willing to pay for a medicine,” which “makes cancer medicines unaffordable, preventing the full benefit of the medicines from being realized.” (2)

Radhika Patel, campaigner at Global Justice Now, said:
“Millions of people across the country run marathons, make donations or volunteer their time to help the fight against cancer, and every penny counts. So why is the government letting big pharma charge such vast amounts for drugs where public funding has paid for research? Medical research needs first and foremost to serve people, not lay the ground for pharmaceutical company profits. It is time for ministers to turn the corporate-driven model of drug production on its head and put people’s right to health first.”

Saoirse Fitzpatrick from STOPAIDS, coordinator of the Missing Medicines Coalition, said:
“The government is always talking about value for money, well this is an area where we could be saving money and lives. The public are footing the bill for the riskiest part of drug development where breakthroughs happen. Then the big pharmaceutical companies swoop in, patent a medicine and use the monopoly to charge the public an extortionate price. This leads to crucial treatments being delayed and at times denied to patients in need. It’s time for things to change. Many governments are now looking at how we ensure that publicly funded medicines are affordable to patients and health systems –  the Missing Medicines coalition is calling on the UK Government to follow suit.”

Diarmaid McDonald from Just Treatment said:
“More and more NHS patients are being forced to fundraise to pay for medicines or organise public campaigns to secure access to essential treatments as pharma’s completely unaffordable prices lead to rationing and rejection of proven treatments. On World Cancer Day, the government needs to commit to doing much more than haggling on price and giving up if drug companies refuse to budge – it needs to make big structural changes to medical innovation that put patients before profit.”

The call follows a report by the organisations in October calling for major changes to health innovation to deliver public value, including:

The NHS has increasingly rationed or refused drugs in recent years because of high prices. In 2017 breast cancer drug palbociclib was turned down by the NHS for being too expensive, but was later licenced after drug giant Pfizer came under pressure to lower the cost. UK patients cannot access the cystic fibrosis drug Orkambi because of the £104,000 per year price demanded by its manufacturer, Vertex Pharmaceuticals, despite years of negotiations. And spinal muscular atrophy (SMA) treatment Spinraza was rejected in August last year on value for money grounds, despite it being licensed in Europe and the US. (4)

The Missing Medicines coalition, coordinated by STOPAIDS, is a network of STOPAIDS members and other organisations committed to ensuring people everywhere get the medicines they need at prices they can afford. We use advocacy and public campaigning to build awareness of access to medicines issues in the UK and around the world and fight for the Right to Health to be realised. See http://missingmedicines.co.uk/

1. NHS England figures released in November show that £18.2 billion was spent on the medicine bill in 2017-18, https://digital.nhs.uk/data-and-information/publications/statistical/prescribing-costs-in-hospitals-and-the-community/2017-18.

The Missing Medicines Coalition’s analysis of NHS England spend on individual drugs shows that 3 of the top 5 cancer drugs were developed with publicly-funded research:

In total, more than £1 billion is spent annually by the NHS on drugs where public money has funded their research and development, https://www.globaljustice.org.uk/resources/pills-and-profits-how-drug-companies-make-killing-out-public-research