By Caitlin Evison on 24th September 2019

Jeremy Corbyn announces ‘Medicines for the many’ 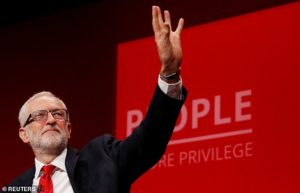 ‘Luis, and tens of thousands of others suffering from illnesses such as cystic fibrosis hepatitis C and breast cancer are being denied life-saving medicines by a system that puts profits for shareholders before people’s lives.

Labour will tackle this. We will redesign the system to serve public health – not private wealth – using compulsory licensing to secure generic versions of patented medicines. We’ll tell the drugs companies that if they want public research funding then they’ll have to make their drugs affordable for all. And we will create a new publicly owned generic drugs manufacturer to supply cheaper medicines to our NHS saving our health service money and saving lives. We are the party that created the NHS. Only Labour can be trusted with its future.’

The Labour party also published a new policy paper Medicines for Many: Transforming health innovation to prioritise public health in the UK and beyond.

Big Pharma have ripped off the NHS and patients around the world for years by charging excessive, ever-escalating prices for new medicines. In developing countries, patients either have no access to key drugs or they are so expensive that they are forced to choose between food or medicine. As a result, countless patients have died without access. We therefore hugely welcome Labour’s announcement that they are willing to break Big Pharma’s grip on our health by ensuring that the UK’s model for researching and developing medicines is fit for public health needs, not profit. This is essential in the fight to achieve universal health coverage and ending global epidemics, such as AIDS and tuberculosis.

STOPAIDS and the Missing Medicines coalition have long argued that the high prices of new medicines are unsustainable for an already underfunded NHS and put these treatments completely beyond the reach of patients in developing countries. We have also consistently highlighted that the current innovation model does not adequately address pressing global health needs.

To tackle the immediate crisis facing the NHS, the Labour party state that they would use existing tools to force prices down. Issuing crown or compulsory use licenses for patented medicines is one such tool in circumstances when the NHS is not being offered an affordable price. This could be a real game-changer for immediately increasing patient access to medicines. For example, Labour  highlighted the current deadlock between the UK and pharmaceutical company Vertex over Orkambi (the cystic fibrosis drug). After three years of failed negotiations, children living with cystic fibrosis in England are still being denied access as Vertex refuses to drop the price to one that is affordable for the NHS. As highlighted by Just Treatment’s campaign, a Crown use license could secure NHS patients access to a cheaper, generic version.

Furthermore, Labour intend to end the scandal of the public effectively paying twice for the same medicine – first to develop it and then again to stock it. STOPAIDS and Global Justice Now’s ‘Pills and Profits’ Report (2017) highlighted the high level of UK public money used to develop new drugs – with two out of five of the NHS’s most expensive drugs discovered using substantial public money.  In order to ensure a public return from public investment, Labour puts forward a plan to attach strong public interest conditions to government funding contracts for Research and Development (R&D) and increase transparency of the true costs of R&D.

Labour’s new policy commits a future Labour Government to play a more active role in ensuring that the rewards and incentives for innovation are tailored to delivering for public health needs rather than maximising monopoly driven profits for pharmaceutical companies. This is an important step. Our governments must do more than simply treat the symptoms of our fundamentally flawed system, such as the failure of the pharmaceutical industry to develop new antibiotics. Instead they should transform our R&D model. We are therefore delighted to see that a Labour Government intends to explore greater UK Government use of a delinkage approach to health innovation.

Delinkage is an innovation model based on the premise that the costs and risks associated with R&D should still be rewarded, but that the incentives for R&D can be provided by means other than the financial returns made from high product prices during the period of patent protection. A model of delinkage involves paying for R&D through a combination of research grants, subsidies, and cash or other rewards for successful achievement of various objectives You can read more about how a delinked approach to R&D could work in our People’s Prescription Report (2018).  We also welcome that Labour supports the need for a UN High Level Meeting on Global health, Innovation and Access to Health Technologies so that persistent policy incoherencies between intellectual property, human rights and trade and a binding Convention on R&D can be discussed.

It is promising to see how a Labour Government would take greater public control over medicines production. We welcome the support for a mission-orientated approach as this would marshal unprecedented coordination in innovation for health. Labour have strong recommendations for how to implement this, including by creating a medical innovation council to define innovation missions for health and financing publicly owned, democratically-controlled pharmaceutical companies with specific missions to serve the needs of the NHS. We outlined the need for a ‘National Pharmaceutical Service’ in our short paper with Global Justice Now and Just Treatment ‘Taking Public Control of Medicines’

At STOPAIDS we believe that without a public-health driven model for developing medicines we will not end AIDS by 2030 and achieve universal health coverage. We are delighted that a major UK political party is adopting recommendations that we have long campaigned for and joins the growing global movement that is tackling our broken health innovation model. We very much hope that the other main political parties in the UK will follow suit.