By Caitlin Evison on 2nd October 2019 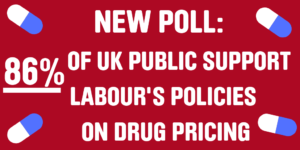 A recent poll suggests that an overwhelming majority of the UK public support Labour’s ambitious plans to tackle high drug prices and ensure access to medicines.

At last week’s Labour Party annual conference, Jeremy Corbyn announced a series of policies detailed in their Medicines For The Many paper that will redesign our failing innovation system to serve public health – not private wealth

To tackle the immediate crisis facing the NHS, the Labour party state that they would use existing tools to force prices down. Labour also intend to end the scandal of the public effectively paying twice for the same medicine – first to develop it and then again to stock it. In the longer term, Labour also plan to play a more active role in ensuring that the rewards and incentives for innovation are tailored to delivering for public health needs rather than maximising monopoly driven profits for pharmaceutical companies.

According to the poll by ComRes commissioned by MHP Communications, 86% of voters in a sample of 2,045 people supported Labour’s package of measures to manage medicine pricing and access.

The poll also showed that more than two thirds of voters (68%) support establishing a UK Government run medicines development and manufacturing company, including the majority of Conservative voters (57%). We outlined the need for a ‘National Pharmaceutical Service’ that has specific missions to serve the needs of the NHS in our short paper with Global Justice Now and Just Treatment ‘Taking Public Control of Medicines’.

At STOPAIDS we believe that without a public-health driven model for developing medicines we will not end AIDS by 2030 and achieve universal health coverage. We are encouraged that this poll suggests that an overwhelming majority of the UK public – regardless of their political affiliation – support the sort of policies that we have long campaigned for.

To save the NHS and support patients across the world, we hope all the main political parties follow the public mood and put forward strong policies to ensure that the UK’s model for researching and developing medicines is fit for public health needs, not profit

ComRes interviewed 2,045 British adults online between the 25th and 26th September 2019 on the recent Labour Party healthcare announcements. Data were weighted to be representative of GB adults by age, gender, region and socio-economic grade.

You can read STOPAIDS’ full response to Labour’s Medicines For The Many paper here.