Over the course of 2019 STOPAIDS engaged with the first ever UN Universal Health Coverage (UHC) High Level Meeting (HLM), which took place on 23rd Sept at the UN Headquarters in New York. One month on from the HLM this blog sets out my reflections on STOPAIDS work in the lead up to the event, the day itself, the Political Declaration that was adopted by global leaders, and what happens next, all through the lens of advocacy on the HIV response.

STOPAIDS work in the lead up to the event

Our advocacy on the zero draft

To capitalise and build upon the platforms created by processes, meetings and events which take place internationally on global health STOPAIDS works to ensure that we understand the threats and opportunities at stake. When relevant, we use our knowledge and expertise to make recommendations to the UK government and others on how to use the processes to further our ambition of ending AIDS by 2030.

We identified that the UHC HLM would be a key political forum for making and re-affirming commitments that would accelerate the end of AIDS, as well as exploring how the vertical infrastructure built up around the HIV response can be adapted and utilised for UHC.

We developed a set of recommendations drawn from members and allies’ expertise and experience on what should have been included in the Political Declaration. We regularly shared these with the UK government especially as new iterations of the draft text emerged. I attended multiple consultation meetings with DFID staff involved in the negotiations on the Political Declaration and joined the multi stakeholder hearing in April to meet with the representatives leading the UK’s engagement in NY.

In the build-up to the HLM, I brought together STOPAIDS members and allies to develop a joint Factsheet on UHC and HIV. The Factsheet explores what we define as the thematic ‘building blocks’ of UHC: Leaving No One Behind; Meaningful Community and Civil Society Engagement; Integration; A Political Response; Sustainable Financing and Accountability.  The piece concludes that the movement to achieve UHC is an opportunity to address some of the many fundamental, structural issues that continue to drive the HIV pandemic. If successful the attainment of UHC could accelerate the end of AIDS and improve the lives of all living with and affected by HIV.

Our advocacy recommendations to the UK Government on what must be be included in the Political Declaration were based on the Factsheet.

At the HLM itself I was encouraged to hear about the existing commitments from some states to include HIV prevention, treatment services and care in national UHC packages. Notably the representative from Thailand included in their address that UHC would include access to Pre-Exposure Prophylaxis The representative from South Africa shared that their UHC package includes the provision of antiretroviral treatment and there are 4.2 million people benefitting from this. I wouldn’t expect every state to mention HIV in their statement but there is a real risk that states will fail to include antiretroviral treatment in their UHC packages – as is discussed in the Factsheet. Whilst the WHO advise this, it is not guaranteed.

A disappointingly small number of states made new any commitments to UHC in their statements. However, I welcomed the announcement from UK Secretary of State for International Development The Rt Hon Alok Sharma MP (who heard the call of our campaign to represent the UK in New York) that the Department for International Development would be investing £600 million in a new Reproductive Health Supplies programme.

Other Member States reminded the audience of the political choices that will be required to make UHC a success. For example, The Netherlands spoke out strongly on the urgent need to increase the amount of transparency in the research and development (R&D) system that creates new medicines.

For me, the low point of the meeting was when a bloc of 17 member states, led by the US, vocally disassociate themselves with a paragraph of the text focused on Sexual and Reproductive Health and Rights (SRHR). They used a statement to express that there is no universal right to abortion and that they did not agree with the inclusion of language affirming SRHR.

In response however The Netherlands led the delivery of a statement supported by 54 member states, including the UK, which highlighted the importance of SRHR and strongly defended the inclusion of the language in the Political Declaration and the importance of upholding SRHR to achieve UHC. 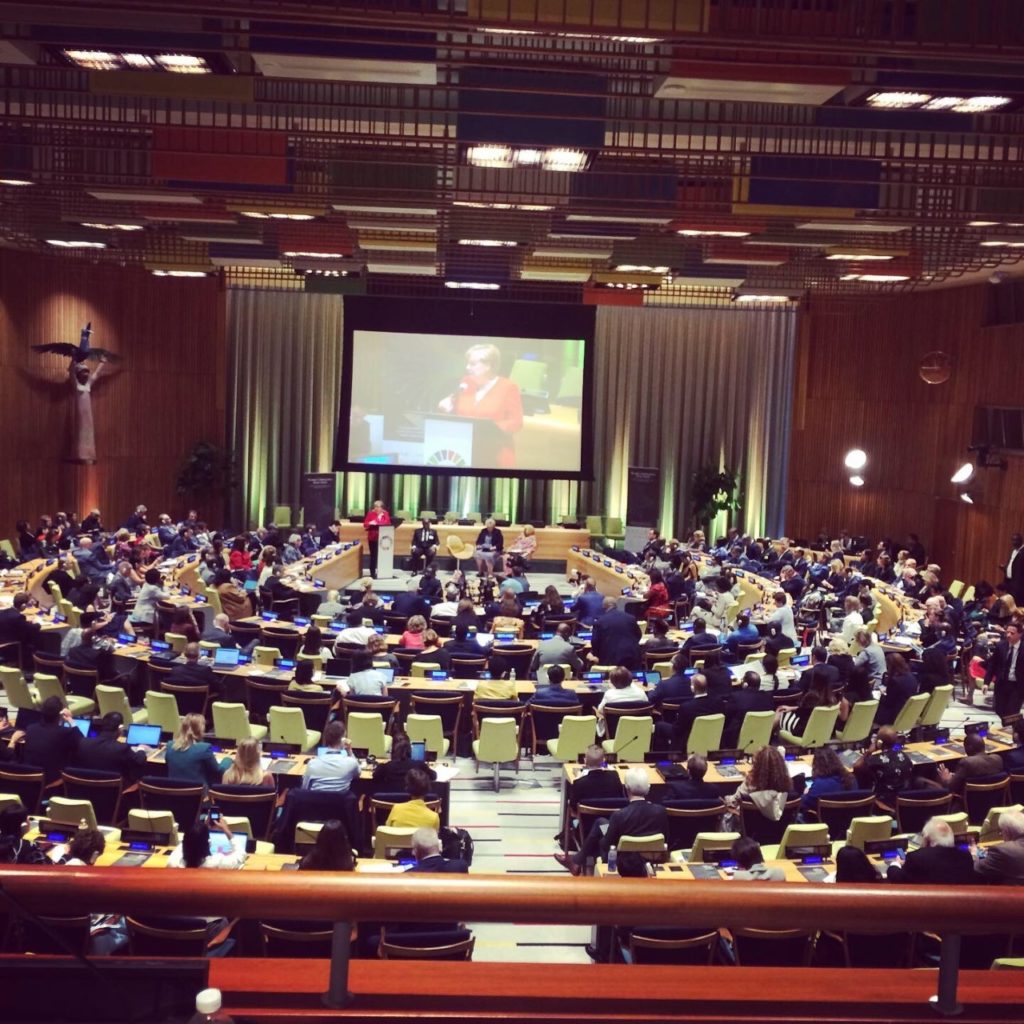 I’m encouraged that some of the commitments that we called for were incorporated in the adopted Political Declaration. There is language that outlines the need to ensure we build upon the fragile gains made in the HIV response and to leave no one behind. There is also a commitment to establishing and maintain people-centred, community based and integrated health systems which will underpin UHC. In the paragraph specifically on leaving no one behind, a key principle of the 2030 agenda, there is a commitment to reach the furthest behind first. Finally, given the tumultuous nature of negotiations around the inclusion of progressive language on access to medicines last year for the Tuberculosis High-Level Meeting, we were pleased that strong language on access to medicines is included in the document and that this wasn’t a major point of controversy. The commitments on this include to explore delinked incentive mechanisms for creating new medicines, increase transparency within the R&D system and TRIPS flexibilities are reaffirmed.

Still, the final adopted Political Declaration provides significant cause for concern and some of the omissions mean that this moment is unlikely to lead to the progress needed on UHC. The lack of references to highlight the severe resource gaps we face to deliver the Sustainable Development Goals (SDGs) and lack of financing commitments is most stark. In 2017, the World Health Organisation estimated that achieving the SDG health targets for UHC would require new investments of USD 371 billion or USD 58 per person, annually, by 2030.

STOPAIDS have calculated that even though Global Fund to Fight AIDS, TB and Malaria was successful in raising USD 14 billion at the sixth replenishment conference, there is a $4.4 billion gap in funding to cover global need in the period 2021 – 2023. Unless these resource gaps are acknowledged, they will not be filled.

It is also disappointing that the document contains no new commitments from donor countries to support low and middle income countries financially in their journey towards UHC. Instead it suggests all countries commit to spending a marginal increase of 1% of GDP more on Primary Health Care, with no insights  into the fiscal space of national governments to increase spending on health care.

Aside from these pitfalls on financing, I am also shocked that no efforts have been made in the Political Declaration to highlight the need to reform regressive laws, policies and social norms that criminalise and discriminate against marginalised groups and prevent them from accessing health care.

The last two paragraphs on follow up for the Political Declaration do not inspire confidence that Member States will be held to account on the commitments made despite the agreement for a follow up meeting in 2023. I fear that rather than galvanizing on an historic opportunity to cement commitments towards realizing UHC, this Political declaration sets countries up to fail and lacks the emphasis on international collaboration across and between governments that will be needed to succeed.

The recent vague response from DFID Minister Andrew Murrison to this Parliamentary Question, with no new commitments to UHC, is concerning. The UK should be using its position to directly support countries in their journey towards UHC and developing a global health strategy to anchor this work. In this way it can inspire other countries to go beyond the parameters of the Political Declaration and help ensure UHC transforms from an ambition to a reality.